Building a home climbing wall is a great way to stay fit – you can set your own routes, never have to wait your turn on the wall, and you have 24-hour easy access! But, it can be expensive to build your own climbing wall, especially when you consider the cost of climbing holds in addition to all of the other necessary materials. So, how much do climbing holds actually cost?

The cost of climbing holds varies dramatically based on the quantity, style, and material of the holds that you select. If you buy a larger pack of holds, the total cost will likely be cheaper per hold. You can also potentially save money by making your own holds or buying used holds. Generally speaking, you might spend around $250 for a new pack of 60 holds, which should be plenty to get started with a home wall.

Let’s look more in depth at what factors impact the price of holds and what you realistically might end up paying for a good set.

There are several factors that dictate the cost of climbing holds, such as:

Climbing holds come in a variety of different materials. Some holds are actually just small rocks with holes drilled through them, but there are also wood, polyurethane, and fiberglass holds available.

The majority of mass-produced holds available today are made from polyurethane, which is quite durable and nearly indestructible. They have a slightly gritty texture that replicates natural sandstone fairly closely. Stone holds can polish over time and become slippery, and wood holds can crack or splinter with heavy use and they don’t replicate the feel of climbing on natural rock very well.

However, the material isn’t the only factor that impacts the price of a set of climbing holds…

Diversity of the Holds

You can purchase a pack of climbing holds that includes only a couple different hold types for cheaper than a pack that includes greater diversity. If you are building a basic wall for kids, a pack with minimal variety will be fine. But, if you are aiming for a serious training wall, you’ll likely want to purchase at least two packs: one pack of diverse hand holds and another pack of small footholds.

Size of the Pack

When you purchase a larger pack of climbing holds, the price per hold is often reduced. However, if you are looking to accumulate a lot of different kinds of holds, you might want to invest in a few different packs from different manufacturers, or various sets from the same manufacturer.

Finally, there are two main hardware types for climbing holds: bolts and screws. Bolt-on holds will likely be more expensive since they typically come with the hardware and the system is more involved than a simple screw. Some screw-on holds will come with screws, but these are usually tiny foot holds so they are cheaper to begin with, and screws are cheaper than nuts/bolts.

You can also make your own climbing holds as a way to save money, but it will require more labor. You could potentially cast your own polyurethane holds, but to buy all of the necessary equipment would likely be more expensive than just buying a few sets of pre-made holds. 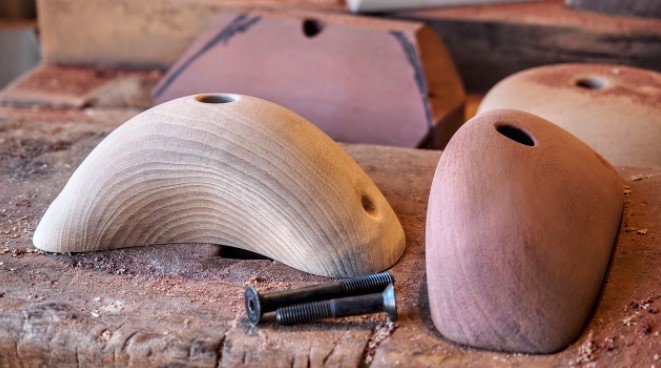 Wood or stone holds are easier to create on your own, but you do need a serious drill to drill through rock. And, you have to find or buy wood pieces/rocks.

Finally, it’s hard to be sure that your holds are safe. So, make holds at your own risk.

Sometimes climbing gyms will sell their old holds for a steep discount. But, these holds might be pretty heavily used and polished, which will make your home climbing wall more challenging. You can also search for used climbing holds from private sellers, like people who have had to dismantle their home climbing wall for one reason or another. Finally, you can approach climbing manufacturers to see if they sell their cosmetically imperfect holds for a discount. 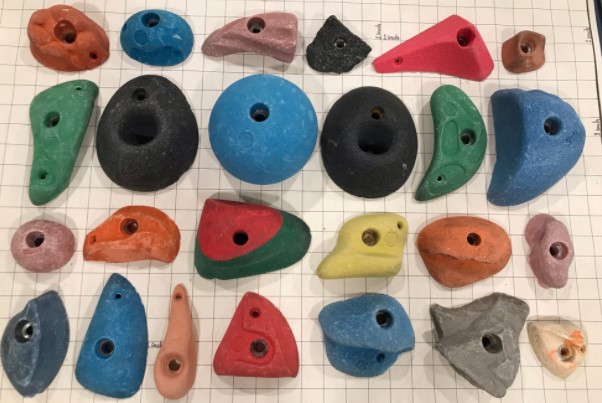 Is it cheaper to make your own climbing holds?

Generally, no. It’s safer and typically less expensive to purchase professionally manufactured holds. However, if you already have the equipment on hand to make climbing holds, it could end up being cheaper.

How many rock climbing holds do I need?

A good place to start is one climbing hold per square foot of wall space. However, you can add more holds to make your climbing wall more versatile and interesting.

How expensive is a climbing wall?

If you DIY, you could build yourself a climbing wall for around $1,000 including the holds, wall face, and support structure. But, if you want to purchase a climbing wall kit or have a custom wall installed, you could easily spend $10,000 or more. Read more about the cost of rock climbing walls here .