Rock climbing is a sport that requires strength and endurance. Rock climbers use grip strength to pull themselves up and over the rocks, and have to maintain balance with their upper body. Rock climbing is an intense workout that burns anywhere from 400-700 calories per hour depending on what type of route you’re climbing! In this article, we’ll explore how many calories do you burn rock climbing.

The endurance required to climb requires climbers to develop grip strength and an increased sense of balance. This training improves the cardiovascular system by elevating heart rate in an effort to keep up with energy demands during strenuous climbs.

Strength is also developed throughout a climber’s body, including their back, arms, core, and even their legs (in order to maintain balance). Rock climbing workouts are very high intensity because they require maintaining a difficult physical activity for a long period of time.

Each route may be anywhere from 10-30 minutes long depending on the person’s skill level and difficulty of the climb itself.

Rock climbing can burn anywhere between 400-700 calories per hour depending on the type of route you’re climbing. Climbers burn calories as they pull themselves up over jagged rocks with their hands and feet.

The higher the difficulty, the more calories are burned in a given amount of time. Many climbers opt for repeated climbs with rest periods to total about an hour’s worth of climbing, potentially burning close to 1000 calories each session!

How Many Calories Do You Burn Rock Climbing: 3 Must-know Factors

There are several variables that influence how many calories you burn while climbing mountains or rocks. 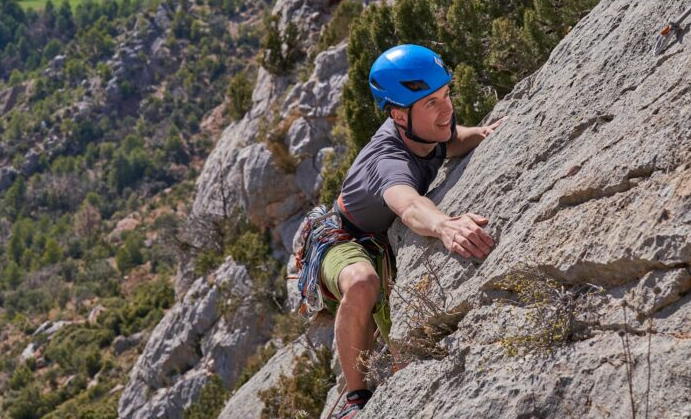 Obviously, the more you weigh, the more energy or calories it will take for your body to get over a difficult section of a climb. The less you weigh, the easier it will be for you to ascend the wall! This is why climbers often lose weight in an effort to make climbs easier and take longer breaks at rest holds.

2) The difficulty level of the route

When answering the question of how many calories do you burn, the difficulty level of the route plays a major role in this. Difficult routes require more strength and effort during each pull-up move. In this case, you’ll burn even more calories compared to an easy climb (and remember, effort equals calorie expenditure).

Climbers familiar with a particular “route” may find that they expend less energy due to knowing the holds and their body’s natural ability to ascend them based on past experience. For beginners, a new route will require more effort during each pull-up and therefore burn more calories per climb.

Climbing up very steep sections requires maximum use of your upper body strength. This type of climbing is great for building lean muscle mass in your arms and shoulders which can help you lose weight!

Climb too many shorter routes in succession without proper rest, and you’re burning fewer calories overall than if you were climbing one long route that burns the same amount of calories because it takes longer to complete.

In this case, climbers are better off taking longer breaks between climbs to ensure they’re burning the same amount of calories as a single long difficult route.

5) How often do you climb

You can increase your calorie expenditure by taking more frequent breaks and by climbing for longer periods of time. Climbing several days in a row or several times per week will build more muscle mass and help burn off stored fat.

How Do I Calculate the Calories Burned While Rock Climbing?

The amount of calories burned while rock climbing is contingent on the individual’s weight and the difficulty level of the route. As mentioned above, it’s possible for a climber to burn up to 700 calories per hour depending on how difficult the climb is. 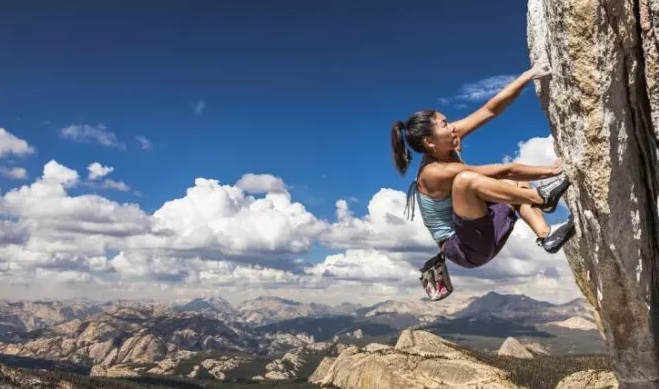 The following are the required and demonstrated methods for determining calories burned:

For instance, suppose you weigh 150 pounds (approximately 68 kg) and play rock or mountain climbing, which has an  8 MET value.

You can use our Rock Climbers calculator to estimate how many calories you burn in rock climbing and other activities. Calorie calculators use the formula from above – it takes into account your weight, the degree of difficulty, and how often you typically climb and tells you just how many calories burnt!

The estimated number of calories is only an approximation based on the amount of time spent rock climbing.  It does not account for extra physical exertion, such as the strength and agility needed to move over rocks or even factors like weather conditions.

Is rock climbing a good way to lose weight?

While rock climbing itself is not necessarily a weight-loss activity, it helps expend calories and ultimately decreases stored fat.

Rock climbers are constantly building strenuous and lean muscle mass through their training process. Many athletes use rock climbing workouts as part of their exercise routine in order to help gain overall strength throughout the body, especially in the hands and upper body where you need grip strength to climb up rocks!

Climbers may also opt to take breaks during routes by hanging off of “jug handles” or toeing into “crack edges” to rest. This involves burning extra calories due to the body’s effort to support itself during these breaks that are not required while climbing without taking a break.

Are there any other activities that are like rock climbing?

Rock climbers have strong and lean muscle as a result of their physical activity! Climbers train to build stamina in their legs, arms, back, and core muscles.

To assist this process, many climbers use training exercises at the gym that incorporate free weights or resistance bands.

These workouts help develop the muscles used when rock climbing which overall helps make them stronger in all aspects of life. Things you can do include but are not limited to biking, swimming, running, and hiking!

How to effectively burn calories while rock climbing?

If you’re looking to burn the most calories possible when rock climbing a difficult wall then opt for more difficult routes. It is also recommended to climb longer if possible (30 minutes rather than 10). If that’s not an option, take breaks by hanging off of “jug handles” or toeing into “crack edges.”

Can you be unfit and still rock climb?

Yes! Rock climbers are often referred to as very fit individuals because they train to build endurance in their arms, back, and legs muscles.

There are several different types of rock climbing walls now that make it easier for beginners to learn and challenge themselves. You can find these walls at gyms around the country; some gyms even offer classes specifically designed for beginner climbers.

Belaying requires some calories to be burned, but not a significant amount. Belayers are responsible for catching their climber when they fall in order to avoid injuries and ensure safety during the activity.

When someone falls during rock climbing, the belayer catches them using a thin rope that pulls tight around the climber’s waist by a descender or belay device.

During this process, it is important to hold on until all slack has been taken up from around the waist of the falling climber before giving slack so as not to risk injury when catching your partner. Depending on how much weight is applied while catching can decide whether or not you will burn calories due to exertion!

Is bouldering a good way to burn calories?

Bouldering is a type of rock climbing without ropes. Boulderers climb shorter routes and reach the top using muscle strength, dexterity, and endurance as opposed to relying mostly on technique.

As a result, boulderers burn more calories than those who are just beginning, but not as many as experienced roped climbers.

To find the number of calories burned during a particular boulder climb, it is critical to know how much you weigh and what your estimated intensity level was for that session. If you are bouldering outside, make sure to factor in that it takes longer than climbing indoors due to the difficulty of route finding and nature’s elements!

How Many Calories Do You Burn Rock Climbing – Conclusion

In conclusion, rock climbers benefit in many ways from their physical activity! In addition to building muscle strength and endurance for climbing routes, they burn a significant number of calories each hour depending on the difficulty level of the route.

Rock climbers practice intense workouts that can take anywhere from 10-30 minutes per climb which helps burn calories as well! So next time you’re struggling through another 30-minute cross-training routine at the gym, think about how much more effective your workout would be if it involved climbing rocks!