Carabiners are crucial pieces of gear when it comes to rock climbing, but only for certain types. Boulderers might not own a single carabiner, while dedicated sport or trad climbers might have entire closets dedicated to gear storage and a huge rack of carabiners.

In this article, we’ll cover the different types of climbing carabiners and how they are used, as well as look more in depth at how many of each type you’ll need for various types of climbing. 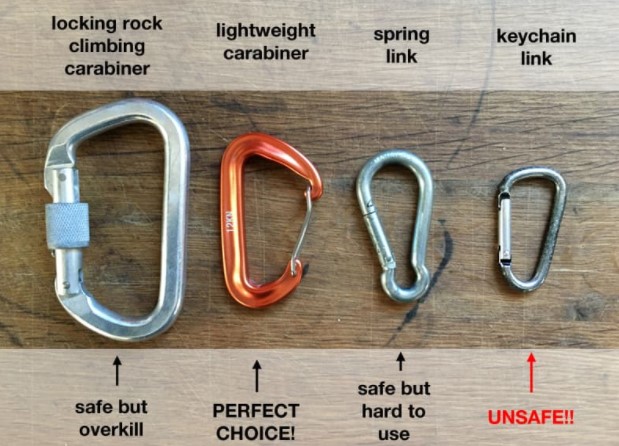 A basic carabiner is an oblong forged metal link with a spring-loaded gate that snaps closed when released. Climbing carabiners are exceptionally strong, and they come in a variety of different shapes, sizes, and gate styles. 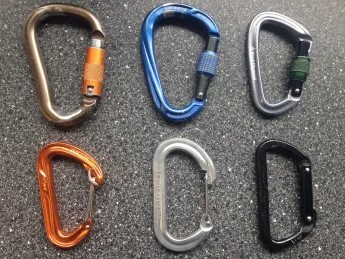 Most sport and trad climbers have at least a few single carabiners with them at all times, as they can be used to clip a chalk bag to your harness or hold your trad rack or other gear, and they can be used as bail ‘biners in case you get in over your head while leading.

Quickdraws are pieces of equipment that include one or two carabiners, depending on the type. Sport climbing draws have two carabiners that are connected by an extremely strong piece of nylon webbing that’s called a dogbone. While leading, a sport climber will clip one carabiner to the bolt on the wall and clip their rope into the other carabiner to protect against big falls. 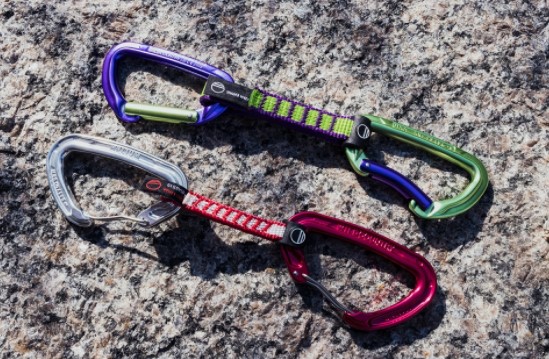 Trad quickdraws only have one carabiner that is used for the rope, while the other end of the draw has a cam on it that can be placed into a crack in the wall. Trad climbers also often use alpine quickdraws, which are made from much longer loops of nylon webbing and two carabiners. These can be used to elongate trad quickdraws or with nuts, which are a type of protection that don’t usually include a carabiner already.

Quickdraws use basic carabiners as components, but they are generally sold as units so it’s important to know the difference between a carabiner and a quickdraw as a whole.

Finally, locking carabiners have gates that can be locked closed to prevent them from accidentally opening. The locking mechanism can either be a manual screw style or an auto-lock, depending on your preference. Locking carabiners should always be used with belay/rappel devices and prusiks (a safety device for rappelling), and they are sometimes used for anchors and at other critical protection points. However, they are heavier and more expensive than basic carabiners and it takes extra time and effort to lock them, so they aren’t necessarily suitable for every situation. 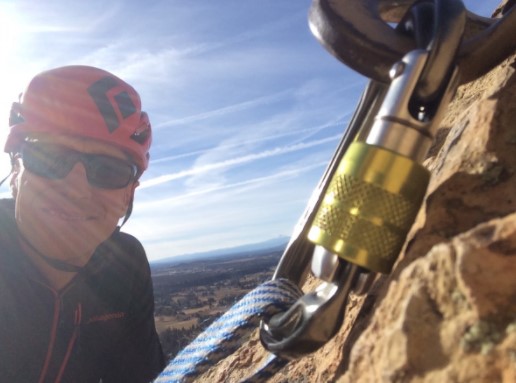 Now that we’ve covered the various types of carabiners, let’s break down how many of each type and how many total carabiners you will need for each type of climbing. 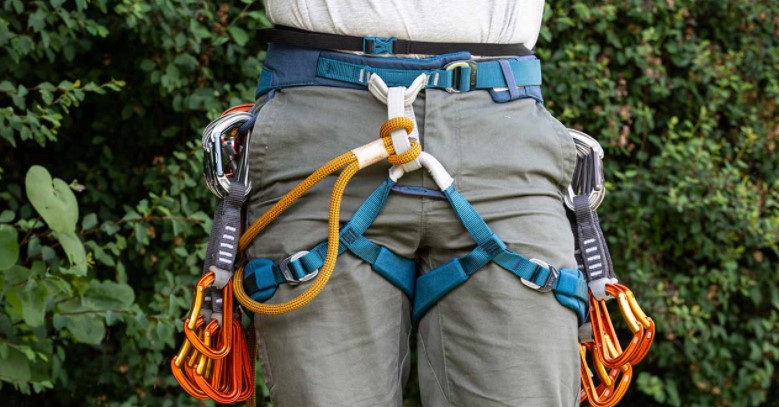 With bouldering, there are no ropes, harnesses, or protection points, so there is essentially no need for any carabiners. Some boulderers will use a carabiner to clip their climbing shoes to the outside of their backpacks after a climbing session, but no carabiners are strictly necessary for bouldering itself.

If you are sport climbing in a gym, you will only need a couple carabiners. Most gyms require you to bring your own belay device, so you’ll need at least one large locking carabiner for that. You might also want a basic carabiner to attach your chalk bag to your harness, but that’s not absolutely necessary. Even when you are lead climbing in a gym, the ‘quickdraws’ are already bolted to the wall, so you don’t need to bring your own or even place them as you climb.

Outdoor sport and trad climbing is where you really need a lot of carabiners. You’ll need a big locking carabiner for your main belay device, and a secondary locker and belay device for whoever cleans the route. You will also need plenty of quickdraws—12 draws (which means 24 carabiners) is usually a good amount to start sport climbing single pitch routes.

If you will be climbing trad routes, you’ll likely need around 20-30 carabiners just to rack your gear so you can carry it all with you while climbing. In addition to that, you’ll need plenty of alpine draws and/or sport draws. Trad climbing is by far the most gear-intensive, and it requires even more specialized knowledge than sport climbing, since you need to know how and where to place your own protection. It’s best to take a class or learn from experienced friends before you begin building your trad rack or attempting it on your own.

It’s also a good idea to have a basic bail ‘biner, one to hold your chalk bag, and a couple to hold any other gear you might need while climbing. While it is acceptable to use two standard sport climbing quickdraws for the anchor at the top of your climb, you may wish to use a designated anchor if the situation calls for it, in which case you will need four extra locking carabiners.

Finally, unless you will be solely top roping outside, it’s a good idea to carry a personal anchor system (PAS) or a similar setup that allows you to clip in directly to the anchor, or to a bolt in an emergency. These should always be used with a locking carabiner, and, in an ideal world of redundant protection, two PASs with two locking carabiners should be used for going in direct.

If you’ll be multi pitch climbing, you will need even more carabiners since you’ll need to set up a belay point on the wall, manage all of your gear, and so forth. Plus, it’s wise to carry a few extras in case you accidentally drop one, since you can’t simply retrieve it from the ground.

How Many Locking Carabiners Are Needed for An Anchor?

How Many Quickdraws Do I Need for Sport Climbing?

You’ll probably need 10-12 quickdraws to get started, depending on how long the routes are that you plan to climb and how many bolts they have. Quickdraws are often sold in packs of six, so two packs is usually a good place to start.

Why Do Rock Climbers Have so Many Carabiners?

Carabiners have many different uses in rock climbing, and it’s always better to have extra gear on hand than not enough—carabiners included. Especially if you are leading an outdoor sport or trad route, you will need dozens of carabiners just to get started.

How Many Locking Carabiners Do I Need for Multi Pitch?