Climbing ropes are exceptionally strong, and they serve as a crucial safety device for sport and trad climbers. However, before trusting your life to a climbing rope, you may be wondering how these ropes are actually constructed.

So, what are climbing ropes made of? Modern climbing ropes are made of nylon, which is a synthetic polyamide. Since the 1960s, the ‘kernmantle’ construction method has been used for essentially all climbing ropes, where nylon fibers are braided and twisted together tightly to create a strong core, which is then covered in a woven nylon sheath for protection.

In this article, we’ll have a look at how climbing ropes were made before the invention of the nylon kernmantle rope, and we’ll cover how the kernmantle technique works in more detail.

A Brief History of Rope Materials

Climbing ropes used to be made of hemp, flax, and other natural materials. These ropes were much heavier, less strong, and less durable than modern ropes. Additionally, they were static, which means there is no stretch in the rope. Modern nylon ropes are dynamic, which means they stretch a little bit – which makes falling while climbing less painful and less dangerous. 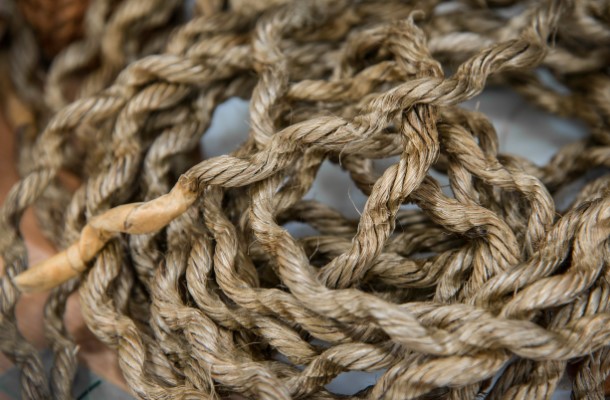 It was not uncommon for hemp ropes to snap when weighted suddenly, especially if they were pulled tight over a sharp or rough piece of rock. Plus, they had a tendency to coil and tangle. Nylon ropes can certainly still tangle and coil up annoyingly, but far less than with old-school hemp ropes. Even in the 1940s once nylon ropes were invented, they were still prone to wearing, fraying, and coiling.

There are several steps involved in the kernmantle rope construction process: 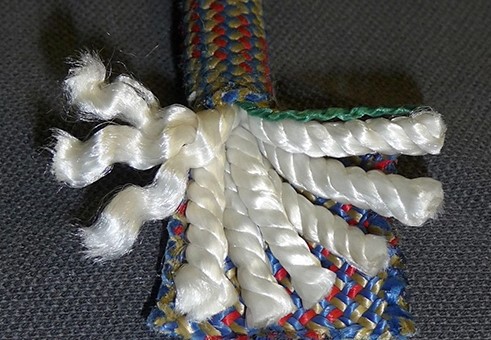 First, thousands of tiny white synthetic nylon fibers are woven and twisted together to form nylon yarn. Then multiple lengths of yarn are spun together while under tension to create progressively larger strands, until the core of the rope has been built up to the appropriate thickness. The core of a kernmantle rope accounts for about 80% of its strength.

The nylon is heat treated, which alters the structure of the fibers and gives the rope its stretch and ability to recoil to its original length after absorbing a fall.

Some ropes are also dry treated. Nylon naturally absorbs water, and when a nylon rope gets wet, it can lose up to around 50% of its strength. This is why it’s so important to keep your climbing rope dry when you are using it, or purchase a dry treated rope if you will be climbing in alpine locations or wet conditions.

In dry treated ropes, the nylon in both the core and the sheath is treated with a chemical bath that helps repel dirt and moisture to protect the rope’s strength and prolong its lifespan.

Once the core is woven together, heat treated, and dry treated if necessary, the sheath is added. Colorful flat strands of nylon are braided into a sleeve around the core, while under tension. The sheath accounts for about 20% of the rope’s strength, and it protects the core from abrasions and damage.

All rock climbing ropes must pass safety tests before they are sold to climbers. The International Climbing and Mountaineering Federation (UIAA) certifies climbing rope manufacturers, and tests ropes by repeatedly dropping weight on the rope until it snaps. Different ropes have different fall ratings, but all ropes must at least be able to withstand five of these test ‘falls’ before breaking in order to be sold to climbers.

Many different components of the rope are tested, including the amount that the rope stretches and elongates under tension, how much weight it can hold, and so forth. Ropes very rarely actually break from falls in real-world conditions, but the more falls that have been taken on a rope, the weaker it gets. It’s best to retire a climbing rope after about 5-8 hard falls to be safe – ‘hard falls’ meaning serious lead climb falls, not just top rope falls or sitting back in your harness on the wall.

What type of rope is used for climbing?

Modern climbing ropes are almost exclusively made of woven nylon and made with the kernmantle construction technique. The ropes used for belaying climbers are dynamic, so they stretch a little bit. Ropes used for hauling gear are generally static, or non-stretchy.

What material is climbing rope made of?

Essentially all climbing rope is made of nylon, which is a synthetic material. In the past, climbing ropes were made of hemp, flax, and other types of natural materials, but these ropes were heavier and less strong than modern nylon ropes.

How heavy are climbing ropes?