Rock climbing involves a lot of terminology that can be confusing for those who are new to the sport, which can make climbing feel inaccessible and hard to get into. For example, you may have heard climbers refer to ‘pitches’ while describing a climb. So, what is a pitch in rock climbing?

A pitch refers to the length of a climb that can be protected via belay by a single rope length in either sport climbing or trad climbing. There is no exact definition of a pitch length, but one pitch is typically anywhere from about 30 to 100 feet.

In this article, we’ll look at the factors that can impact the length of a pitch, the differences between single pitch and multi-pitch climbing, and how pitches are rated in terms of difficulty.

There are a few different factors that can impact the length of a specific pitch, including: 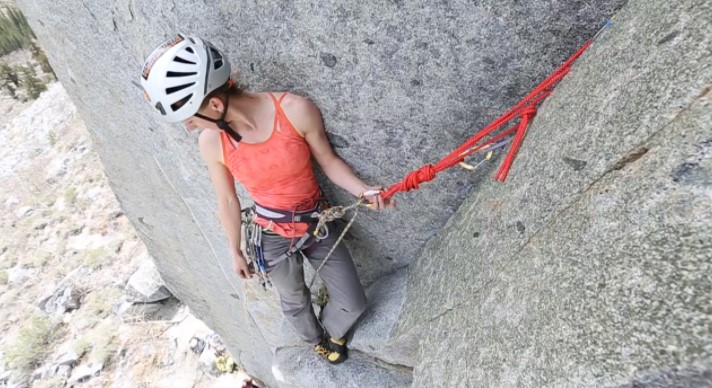 The standard rope length for outdoor climbing is 60 meters (~197 feet), which means that most pitches are purposely limited to about 30 meters/100 feet long. This is because the pitch can only be half as long as the rope – the belayer will stand on the ground while the climber climbs to the top of the route and is then lowered back to the ground, so the rope has to reach from the bottom of a pitch to the top and back to the bottom.

However, some pitches are longer and therefore require a 70-meter rope. For that reason, it’s crucial to check the pitch length before beginning your climb. If your rope isn’t at least twice the pitch length, you will essentially be stuck and may have to untie and downclimb the last bit to ground unprotected, which is a sketchy, dangerous maneuver.

Sometimes the rock itself is the limited factor in pitch length. The vertical face of a cliff or pillar might only be 50 feet tall, in which case the pitch will obviously only be 50 feet long. Or, the ‘good’ rock could run out – maybe the route leads to the base of an unclimbable section, a chossy (full of dangerous loose rocks) area where bolts/anchors can’t be safely placed, or some other obstacle that necessitates the end of a pitch.

The belayer and climber need to be able to communicate from opposite ends of the pitch in order to coordinate safe climbing, lowering, and cleaning. Especially when a pitch goes over a roof, around a corner, or otherwise diverges from a straight vertical climb, the belayer’s ability to see and talk to their climber is reduced, so these types of pitches are often on the shorter end for the sake of safety and communication.

Rope drag refers to weight of the rope that is attached to the lead climber’s harness, which increases the higher they climb as more rope is lifted off the ground. Rope drag is made worse when the lead climber has to pull the rope through a higher number of protection points, and especially when those protection points are in a zigzag shape rather than a straight vertical line. The rope is also often being pulled directly over the surface of the rock wall, adding friction that is worsened by rougher rock, outcroppings or bulges in the rock, and so forth.

Depending on the specifics of the climb, the rope drag may become so significant that it’s almost impossible for a lead climber to continue moving upward despite their belayer freely feeding them rope. At the very least, it makes the climb much more difficult than it really is, since the lead climber is essentially wearing a weighted belt. As such, some pitches where rope drag is a serious issue are shorter to help alleviate the problem.

Finally, sometimes the length of a pitch in a multi-pitch climb is dictated by the presence of convenient belay spots. Many route setters will choose to make a pitch shorter than is strictly necessary to allow climbers to take advantage of a convenient, comfortable belay spot, rather than run out the pitch longer to a non-ideal belay area.

You may have also heard climbers referring to ‘single pitch’ or ‘multi-pitch’ climbing. In single pitch climbing, both the belayer and the climber start on the ground. The lead climber climbs to the top of the pitch and then is lowered to the ground, at which point the roles are usually reversed and the person who belayed first then climbs and cleans the route, returning to the ground afterwards. 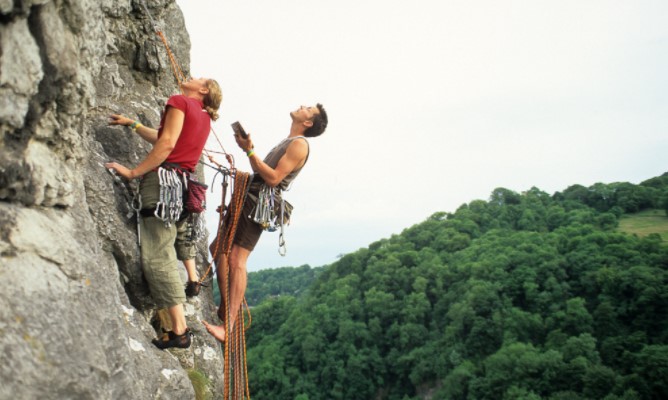 In multi-pitch climbing, the entirety of the route is longer than the distance that a single rope-length can protect, so the climb is divided into two or more pitches. The first climber will tackle the initial pitch, then create a new belay station at the top of the first pitch and belay the second climber from above. In many cases, the lead climber and the follower will alternate roles to reduce the time spent rearranging gear in between pitches – so the first climber leads the first pitch, then belays the second climber as they follow and then leapfrog the first climber to lead the second pitch. Then the roles switch again, and so on and so forth until both climbers reach the top.

Each pitch is given its own difficulty rating, which helps you determine whether you can safely attempt to climb it. The United States and Canada use the Yosemite Decimal System (YDS), although the rest of the world largely uses the French rating system. The YDS is actually used for both hiking and climbing, although all gym and outdoor sport and trad climbs will be rated class 5. Here is the general breakdown of the various classes:

Class 5 climbs are divided into subclasses, which is where the decimals come into play. Subclasses currently range from 5.0 to 5.15d (yes, technically that should be 6.something but frustratingly that’s not how the scale works), although harder classes are added as new routes are created and conquered. Although the ratings are subjective, 5.0 to 5.8 climbs are generally considered beginner level, 5.9 to 5.11d climbs are intermediate, 5.12a to 5.13d climbs are advanced, and anything over a 5.14a is considered pro-level.

The number after the decimal point indicates the grade, while letters are added to climbs that are 5.10 and above to further specify the difficulty level, with ‘a’ being the easiest and ‘d’ being the most difficult.

What is a pitch in climbing?

A pitch is the distance that you can climb while protected by a single rope length.

How far is a mountain pitch?

The exact length of a pitch varies based on several factors, but one pitch is often between 30 and 100 feet.

How many pitches can you climb in a day?

It depends on how fit you are and how fast you climb. For a casual climber, 5-10 pitches in a day would be reasonable. However, some advanced or professional climbers will climb 30 or more pitches in a single day. Alex Honnold has reportedly free soloed 290 pitches worth of distance in a single day, although since he didn’t use a rope, the pitch count is arguable.

What is a pitch in alpine climbing?

A pitch means the same thing in alpine climbing as it does in regular rock or mountain climbing: the distance that you can climb while protected by a single length of rope.