Rock climbing can build muscles, however, it doesn’t mean that it can give you the weightlifter’s body. Rock climbers tend to be leaner and more wired in appearance, yet their muscle tone speaks of difference.

Rock climbing develops all these muscles and builds them to a great extent. Therefore, if you are wondering if rock climbing builds muscle, then you are on the right path. Read on to learn more about the benefits of rock climbing to muscle building.

Which Muscles Does Rock Climbing Develop?

Rock climbing develops your upper body immensely, specifically your back muscles (latissimus dorsi) which you need for pulling yourself up during climbs and your forearm flexors.

The biceps and triceps also can be built when rock climbing. During climbs, you need the muscles on your biceps when resting. To hang requires a lot of tenacity and your biceps get the workout when you are hanging on.

Rock climbing is also a good exercise for those who want abs. It builds muscles in your core and makes them much more pronounced. The experienced rock climber understands the need for his core to be built as this helps him not to be too dependent on the muscles in his biceps and triceps.

Moreover, as a rock climber, weight to muscle ratio is very important, that is why as much as these muscles can be highly developed while rock climbing, an equal emphasis is placed on becoming lean and possessing just the right amount of weight to be a successful rock climber and not on the muscle mass as some may think.

Is Climbing an Alternative to Lifting? 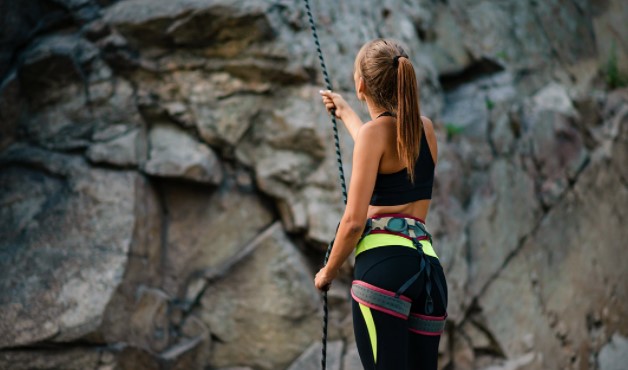 Some do make the mistake of substituting the gym entirely with rock climbing, what this causes is an imbalance in the muscle mass and distribution in the person’s body. While rock climbing can build muscles, it does it in a way that involves pulling.

Rock climbing builds your pulling muscles as those are needed most during climbs and does not build them in other essential ways. Many times, due to lack of knowledge or expertise, rock climbers can overdevelop some specific muscles and leave out the rest. This causes them to be over-independent on those developed muscles.

To correct this imbalance, the climber is advised to hit the gym and indulge him or herself in a regimented workout.

For example, rock climbing will build your back muscles, forearms, core, and triceps, but it offers little or no development to your chest area. You will need push-ups for that. Also, it positions your muscles to be great while pulling and having a really tight grip, however, it comes with the downside of not providing enough power when lifting. These are the reasons why rock climbing is not a given alternative to lifting.

While rock climbing develops most of your muscles, it is not an overall full-body workout. It can build your core, upper body, the lower body that is your calf, feet muscles, tendons, and flexors, however, it leaves out your chest and hip and also does not entirely develop your muscles.

In the first two to three months of rock climbing, you might bulk out, develop muscle mass but that’s it. You will have to tone down to continue. This is because, apart from twinkling your regimen a little to avoid too much weight that can be counterproductive while rock climbing.

Rock climbing involves a higher rate of metabolism and energy use, this inadvertently will burn down those muscle mass and tone you down a bit.

That being said, rock climbing is not in itself a full-body workout. Supplementary regimen in the gym and on the field is needed to supply strength to those places rock climbing does ignore.

Rock climbing is a highly physical sport. It is not convenient for anybody to start rock climbing as if kicking about a football. It is advisable to first gain valuable experience by visiting bouldering and rock climbing gyms to build experience and train certain prerequisite muscles.

While rock climbing can quite be a very rewarding adventure it is also fraught with its risks. In other words, learning safety measures and hacks is paramount for the newbie rock climber who loves the sport.

Moreover, weight is an important issue when rock climbing. As much as your muscles can develop immensely from climbing rocks, muscle toning and mass are of much more importance.

For the average rock climber, diet and regimented exercises and workouts are compulsory for the most satisfying experience. However, for those who just want to have fun rock climbing taking safety precautions is paramount.

Yes, it does. But it won’t give you the weightlifter’s body. It might be in the first three months but not if you want to continue rock climbing.

Therefore, if toning your body and muscles is one of the things you want to achieve with rock climbing, we advise you to go ahead. But if you want huge biceps or a wider chest, better hit the gym.