The ends of a climbing rope typically wear much faster than the middle portion, since that’s where you tie in and where most of the impact of falls is absorbed. This can lead to one or both ends of your rope getting frayed and damaged after a while, while the rest of the rope is still in good shape. Fortunately, instead of retiring the whole rope, you can simply cut off the frayed portion and continue using the remainder of the rope.

So, how do you cut a climbing rope? To cut a climbing rope, first inspect the entire length to determine where to make the cut. Then tightly wrap a couple of inches where you plan to cut with climbing tape. Use a sharp knife (not scissors) to cut the rope in the middle of the taped section. Then remove the tape and use a lighter to seal the ends.

In this article, we’ll cover how to decide whether you should cut or retire a rope, how to cut a rope in more detail, and things to keep in mind after you’ve cut your rope. Plus, we’ll answer a few FAQs.

First, inspect the entire length of your climbing rope. Look for fraying, any sections that are fatter than the rest of the rope, flat spots, parts that feel squishy or soft when you pinch the rope, areas where the sheath is worn through and you can see the white core, or any other visible damage. If you notice damage only on one or both ends of the rope but not in the middle, you can cut the rope and keep using it. But, if you find damage throughout the entire length of the rope, it’s likely time to retire it.

Remember, climbing ropes have finite shelf lives even when they aren’t in use, so keep these guidelines in mind when deciding whether to cut or retire your rope:

These are just general guidelines, and it’s important to keep in mind other factors as well, such as how you are using it (top roping vs. trad climbing, etc.), how many big falls the rope has caught, what type of rock you’re climbing on (sharp vs. smooth), and so forth.

If you’ve decided that your rope has plenty of life left and it’s damaged only on the ends, proceed to step two:

Wrap the Rope with Climbing Tape Where You Plan to Cut

Find the damaged bit furthest from the end of the rope and add about a foot extra just to ensure that you have clean margins when you make the cut. Then, in a seated position, stretch the part of the rope that you intend to cut over your knees, running the rope down the outside of your calves and under your feet so it’s held tight. 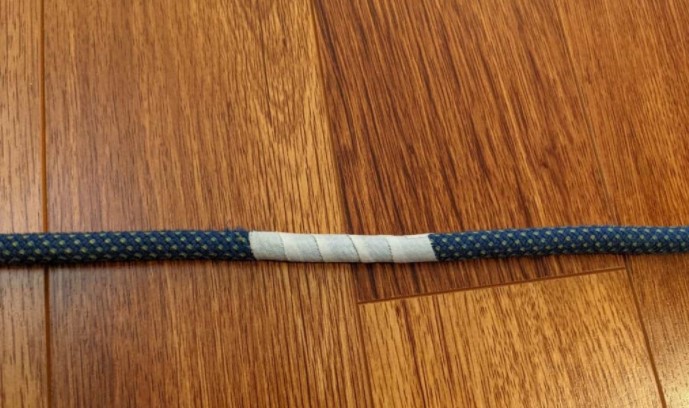 Use climber’s tape to tightly wrap the point where you will make the cut, overlapping the tape slightly as you go so it spirals around a few inches of the rope. This will help prevent the rope’s sheath from unraveling as you make the cut.

Use a Sharp Knife to Cut the Rope

With the rope still held tight by your legs and feet, use a sharp knife to cut through the middle of the taped segment. Be sure to cut away from your body to prevent any injuries. Avoid using scissors, as they will chew up the rope and cause fraying. 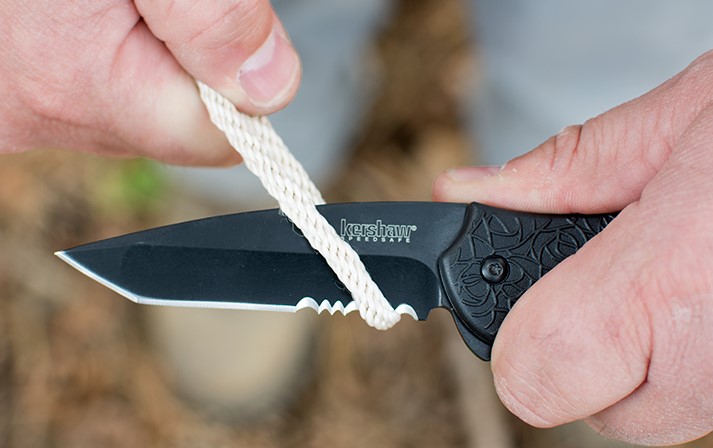 Use a Lighter to Seal the Ends

Once you’ve made the cut(s), gently remove the tape and use a lighter to singe the new ends of your rope. It doesn’t need to be completely blackened, just melted enough that the whole rope won’t unravel. Be sure that you’ve melted both the core and the sheath.

Considerations When You Cut a Climbing Rope

Obviously, your climbing rope will be substantially shorter after you cut a piece off. Measure the part that you cut off and subtract that from the original length of the rope so you know the exact new length. This is crucial information, because if you go to climb a long route thinking your rope is still 70 meters when it’s actually now 65 meters, you could be in big trouble.

Additionally, if you cut only one end of the rope or if you cut different amounts off both ends, the middle mark of your rope will no longer be accurate. Be sure to clearly mark the new middle of your rope before you go climbing with it.

Related  Reading: How to Find a Climbing Partner?

How Do You Cut Climbing Rope?

To cut a climbing rope, inspect the entire rope to determine where to make the cut. Use tape to mark where you plan to cut and to help prevent the rope from unraveling as you cut it. Hold the rope taut and use a sharp knife to cut through in the middle of the taped section. Then remove the tape and use a lighter to melt the new ends to prevent fraying. Be sure to make a note of the rope’s new length and mark the new middle point before you go climbing with it.

Is It Ok to Cut Climbing Rope?

Yes, it’s definitely OK to cut climbing rope. If only the ends of your rope are frayed but the middle portion is still intact, cutting your rope can provide additional months or years of use before you have to retire it altogether.

What Can I Use to Cut Rope?

Use a sharp knife to cut climbing rope. Do not use scissors, as they will fray the rope and won’t provide a clean cut.

How Do You Seal the Ends of A Climbing Rope?

Use a lighter to melt the ends of the climbing rope. Make sure that you get both the core and the sheath so the rope doesn’t unravel or fray.