Sport climbing, top roping, redpoint, trad rack, onsight…what does it all mean?! There are a lot of technical terms involved in the sport of rock climbing, which can unfortunately make the sport feel unapproachable. To combat that, today we’ll be taking a look at the difference between sport climbing and top roping.

So, what is the difference between sport climbing and top roping? Technically speaking, ‘sport climbing’ means lead climbing on a pre-bolted sport route, while top roping means following someone who has lead climbed either a sport or trad route.

What is Sport Climbing?

In sport climbing, you are lead climbing pre-bolted sport routes and affixing your rope to the bolts with quickdraws as you climb in order to protect yourself from hitting the ground if you fall. Your belayer feeds out rope as you climb, and then lowers you once you reach the top. Or, you can clean the route and rappel down. If you leave the rope up, the next climber can top rope the same route without having to lead it again. 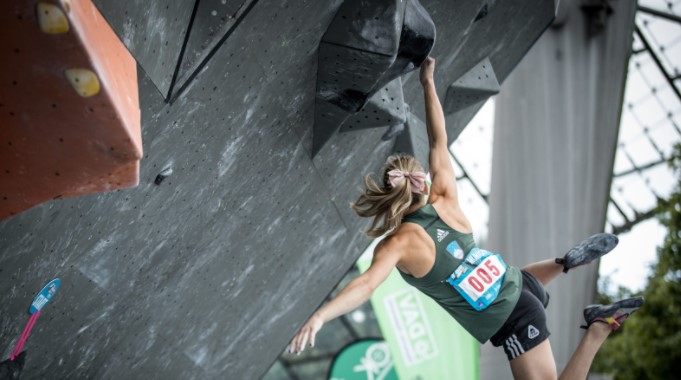 What is Top Roping?

Top roping can be done after someone has led a route – whether it’s a sport or trad route, which means that there are no bolts in place and instead the lead climber places cams and nuts in cracks in the wall to serve as protection. With top roping, the climber ties into the rope, which is strung up through the anchor points at the top of the route, and then back down to the belayer. As the climber ascends, the belayer pulls slack out of the system, so the climber will never fall more than a few feet. Once the climber reaches the top, they can either be lowered by the belayer or they can clean the route and rappel down.

Are They The Same Thing?

In a word, no. To fully understand the difference, let’s zoom out a little bit.

Climbing routes are designated as sport, trad, and/or top rope (or bouldering, but that’s really a separate pursuit). If a route is labeled as top rope, that means that you can probably walk around the back of the route and set up a top rope without having to first lead climb the route. This is a very rare scenario. Generally you will need to lead a climb first, whether that’s by sport or trad climbing. A route also might be sport and top rope, which means that it’s bolted so you can sport climb it if you want, but you can also walk up the back and set up a top rope. Similarly, a route could be trad and top rope.

Purists will say that it’s only technically sport climbing if you are leading. However, for the less competitive climbers, you could say that you are ‘going sport climbing,’ even if you only top rope behind your climbing partner, who is ‘officially’ sport climbing (i.e. lead climbing a sport route). This will make it clear that you are climbing on bolted sport routes, as opposed to following on trad routes, which require the lead climber to place their own protection pieces in/on the wall and essentially always suggests that you are crack climbing.

Basically, top roping can be done on either sport or trad routes. If you want to be very technical when describing the above scenario, you can say that you are top roping on sport routes rather than generalizing that you are sport climbing.

However, unless you are discussing this with a pro climber or a real stickler for technicalities, you can just say that you went sport climbing, even if you were just top roping for now. Top roping is how you get comfortable with climbing, and once you have mastered the movements and techniques while safely on top rope, you can get out there and truly sport climb by leading a route!

Is sport climbing the same as top roping?

Technically, it is not. Sport climbing means that you are lead climbing a pre-bolted route, while top roping is its own category of climbing. Top roping can generally only be done if someone has already sport (or trad) climbed the route, or if you found one of the rare crags where you can walk up the back and set up a top rope.

What is considered sport climbing?

Sport climbing in its purest form is leading a sport route. This means there are no quickdraws or anchors already clipped to the bolts on the wall, and you aren’t top roping. You start from the ground, place quickdraws into the pre-placed bolts as you climb, clip your rope into the quickdraws, and proceed to the top. From there, you can either be lowered by your belayer or you can clean the route and rappel down on your own.